Special news in the auto industry as Mercedes has just almost finished working on one of it’s masterpieces. No only this, but the car has actually been spied so more details than the company would have probably wanted have become public. But that is never bad news for us so let’s see what it’s all about.

We remind you that the third generation SLK has been introduced at the 2011 Geneva Motor Show. Now the brand new Mercedes-Benz SLK has been spied testing. Called now SLC the facelifted Mercedes has been photographed. As it has been stated before, the new name for the car reflects it’s dimension. More to the point SLC refers to the car’s
size in relation to the C-Class.

Changes will be present under the hood of the new car too as the new SLC is expected to run on a twin-turbo V8 4.0-liter motor taken from the AMG GT and C63 AMG. Speculations regarding the car reveal that the new Mercedes has been tested by AMG. Basically this could translate into two options: either the car will be a part of AMG Sport range or the model caught in the pictures might be the SLC 55 AMG. Recent spy photos still don’t clear all mysteries because as we can see the rear bumper is camouflaged.

However list of changes includes split in the middle exhaust pipes. 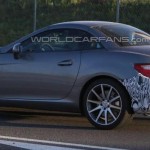 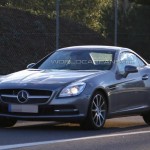 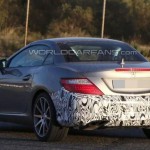 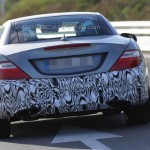 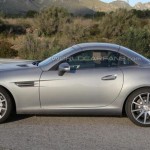