Porsche 911 GT3 RS has been unveiled at the 2015 Geneva Motor Show. Long awaited for by car fans all over the world, the car is trully amazing. Scheduled to go for sale in a few months the new model will have a selling price of £131,296 in UK and €181,690 in Germany. As far as technical aspects go on the outside the new Porsche 911 GT3 RS benefits from an aluminum body combined with a magnesium roof and carbon fiber reinforced plastic hood. Adding the engine lid and other lightweight components to the list we get magic as the car has registered a weight loss of no less than 10 kg in comparison to the regular 911 GT3. Basically the car weighs around 1,420 kg (3,130 lbs).

Attention is also drawn by the daring look as Porsche 911 GT3 RS benefits from
a built-in ducktail spoiler to boost downforce at higher speeds, updated front wings with air ducts and a prominent splitter and a big wing at the back. Inside the cabin magic continues as the list of novelties counts body-colored upholstery and stitching, a three-spoke steering wheel wrapped in Alcantara, a white rev counter and some carbon fiber inserts on the dashboard and door panels. 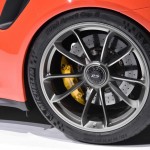 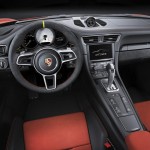 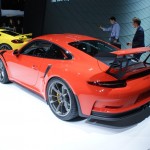 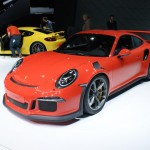 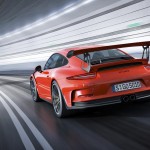 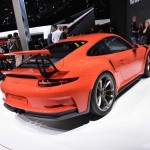