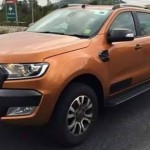 2015 Ford Ranger Wildtrak has recenty been spotted. Described by the producers the car will be “smarter, safer, smoother and stronger” in coparison to it’s predecesor. So far the car has only been seen in a short teaser clip. The film has been posted by Ford Asia Pacific at the end of 2014. The short […]